From Dave: Planning our engagement was one of the best and most memorable events of my life. I am so blessed to have an amazing fiancé that is extremely fit and loves to climb mountains. Some of our best memories together have been on the challenging and steep slopes and summits in the mountains of Colorado. Therefore, rather than strive for the ordinary and boring post dinner engagement, I felt that my fiancé deserved something entirely unique to our story. 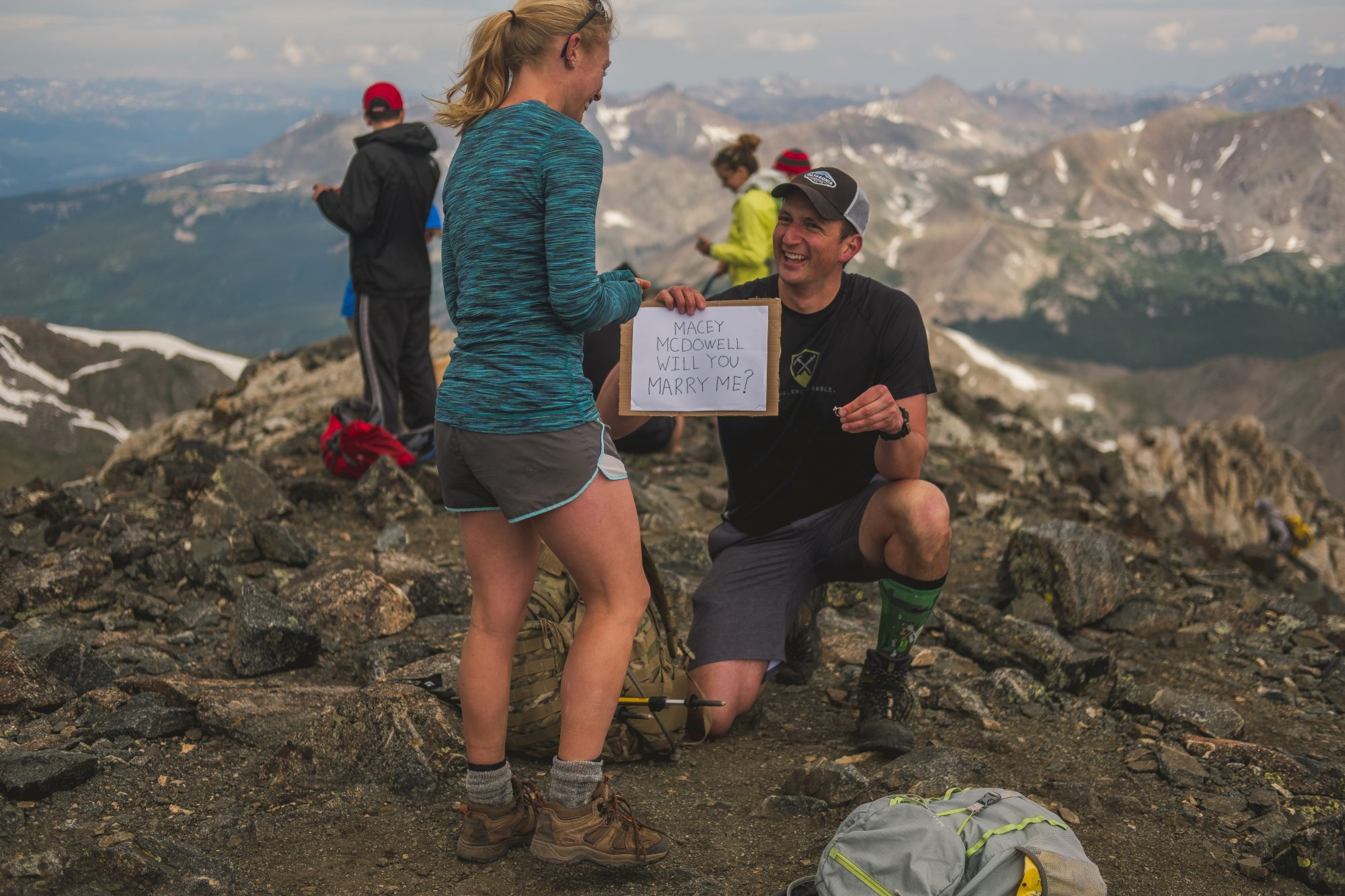 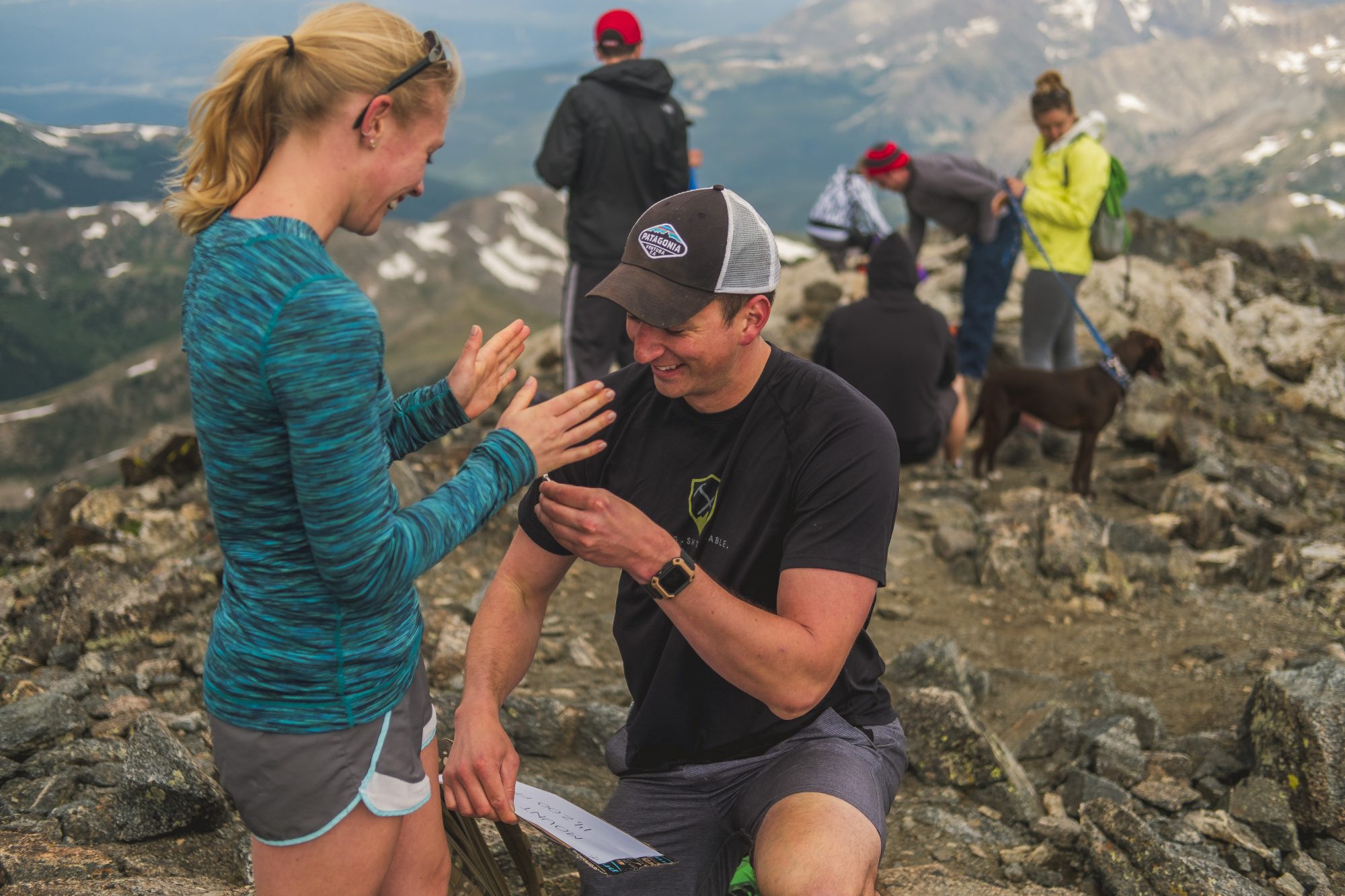 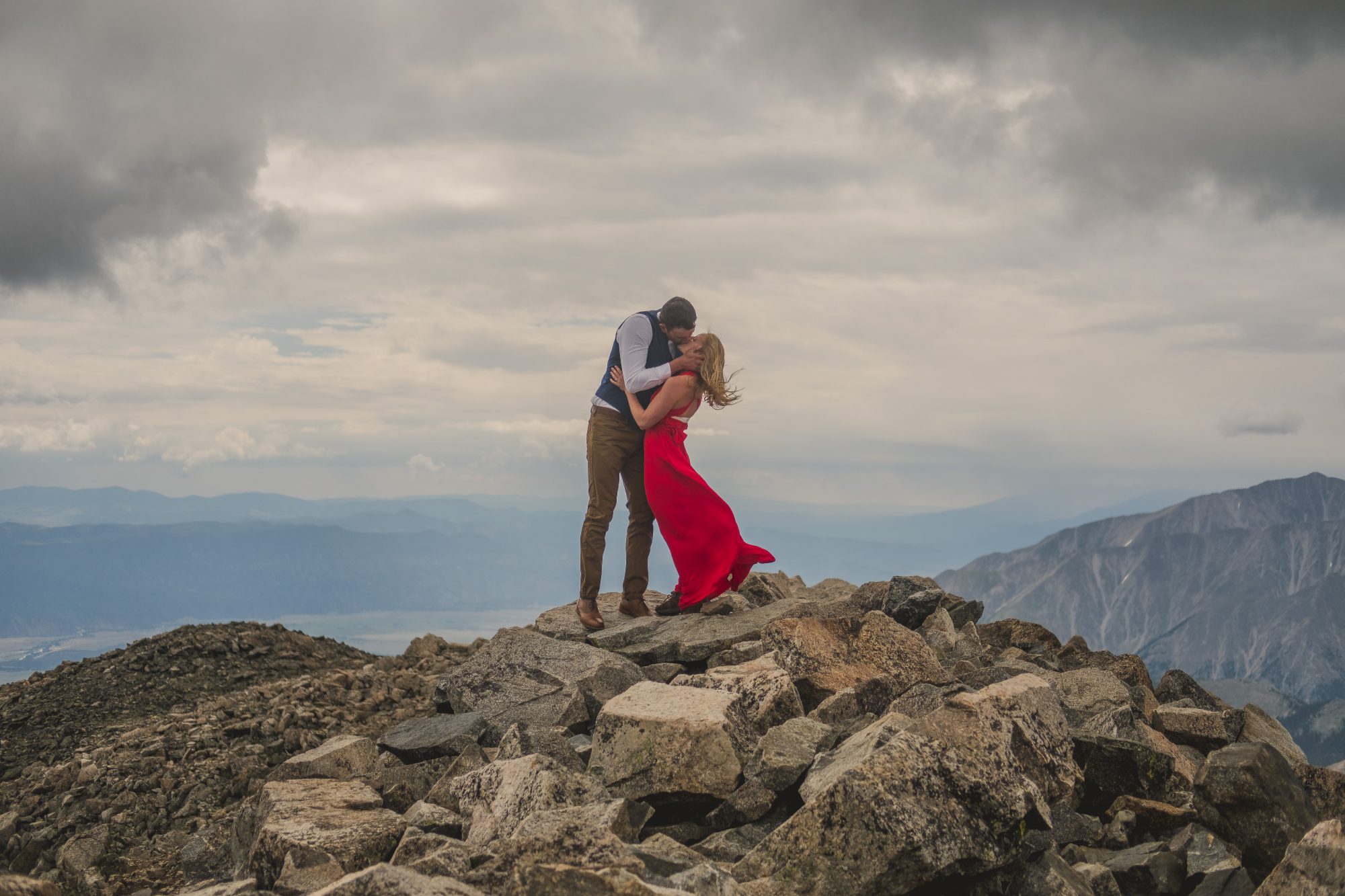 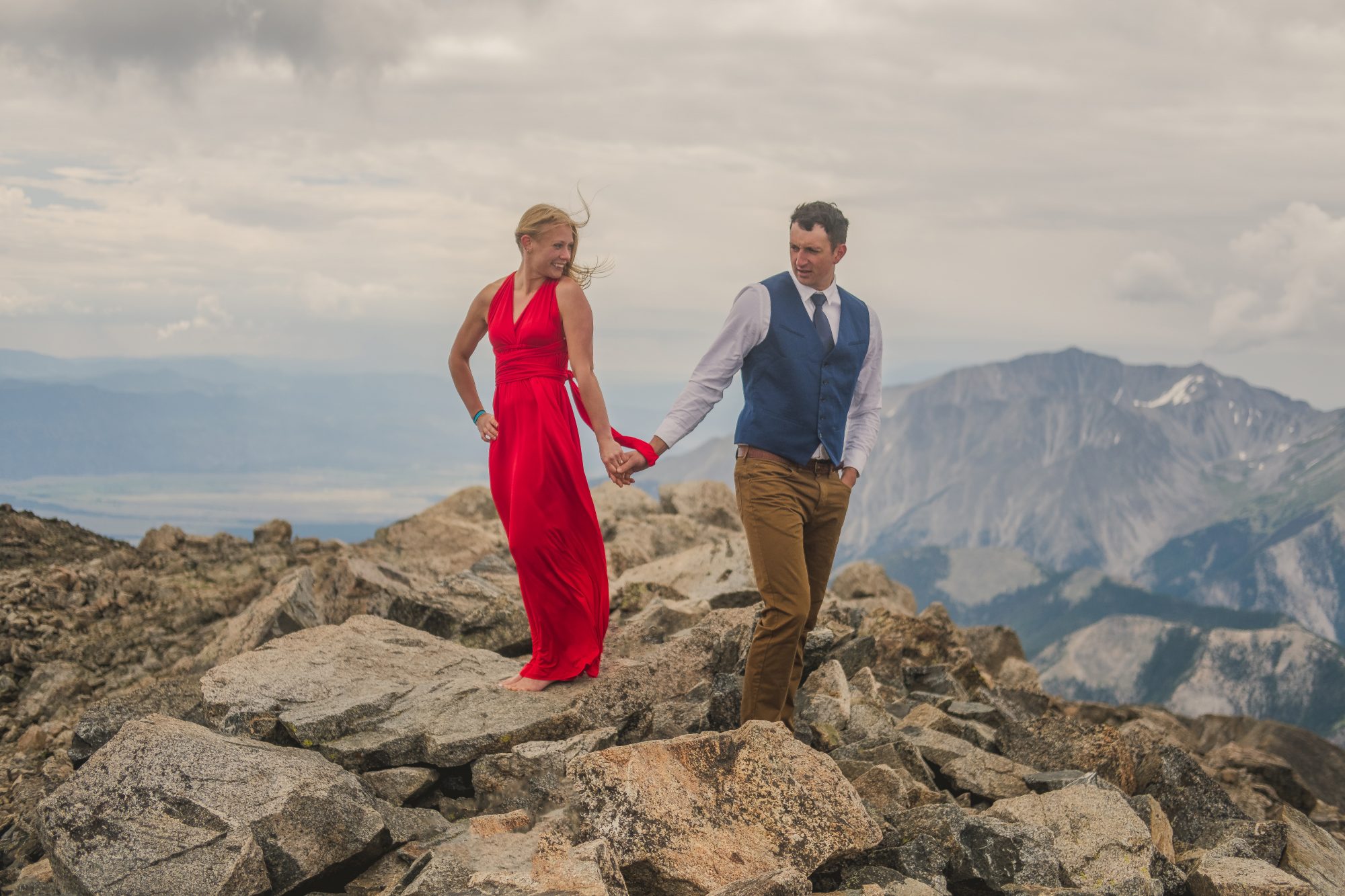 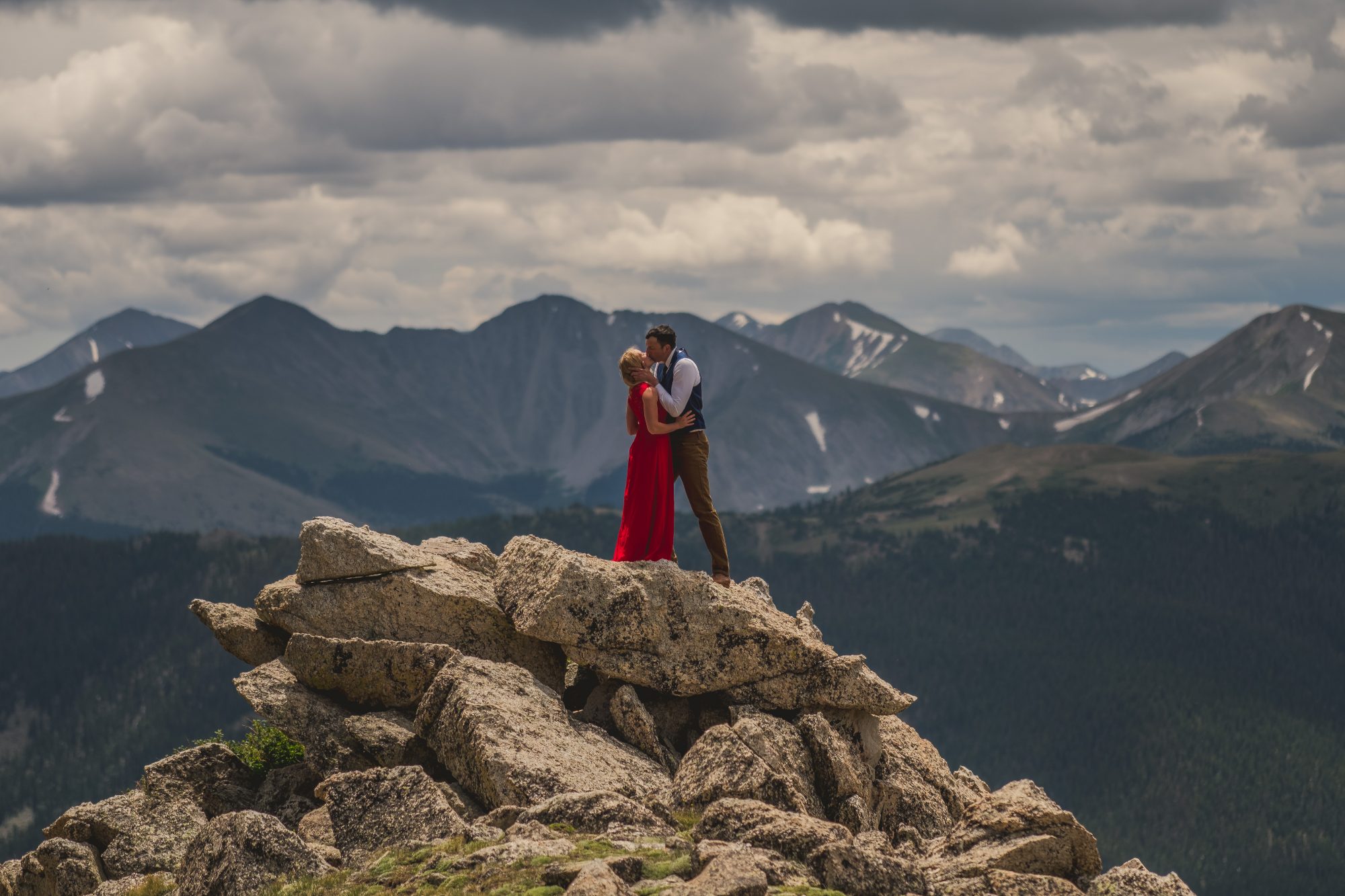 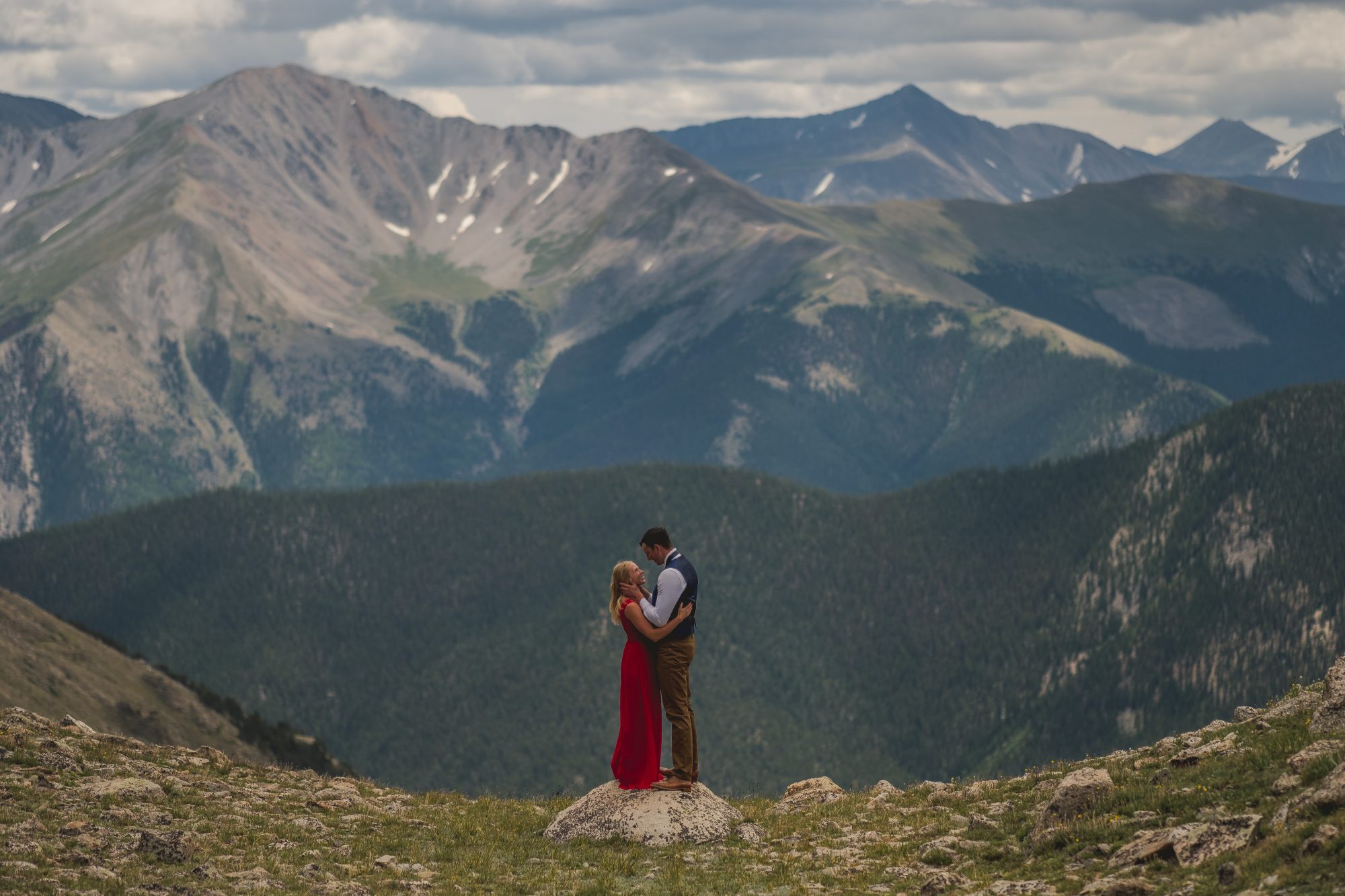 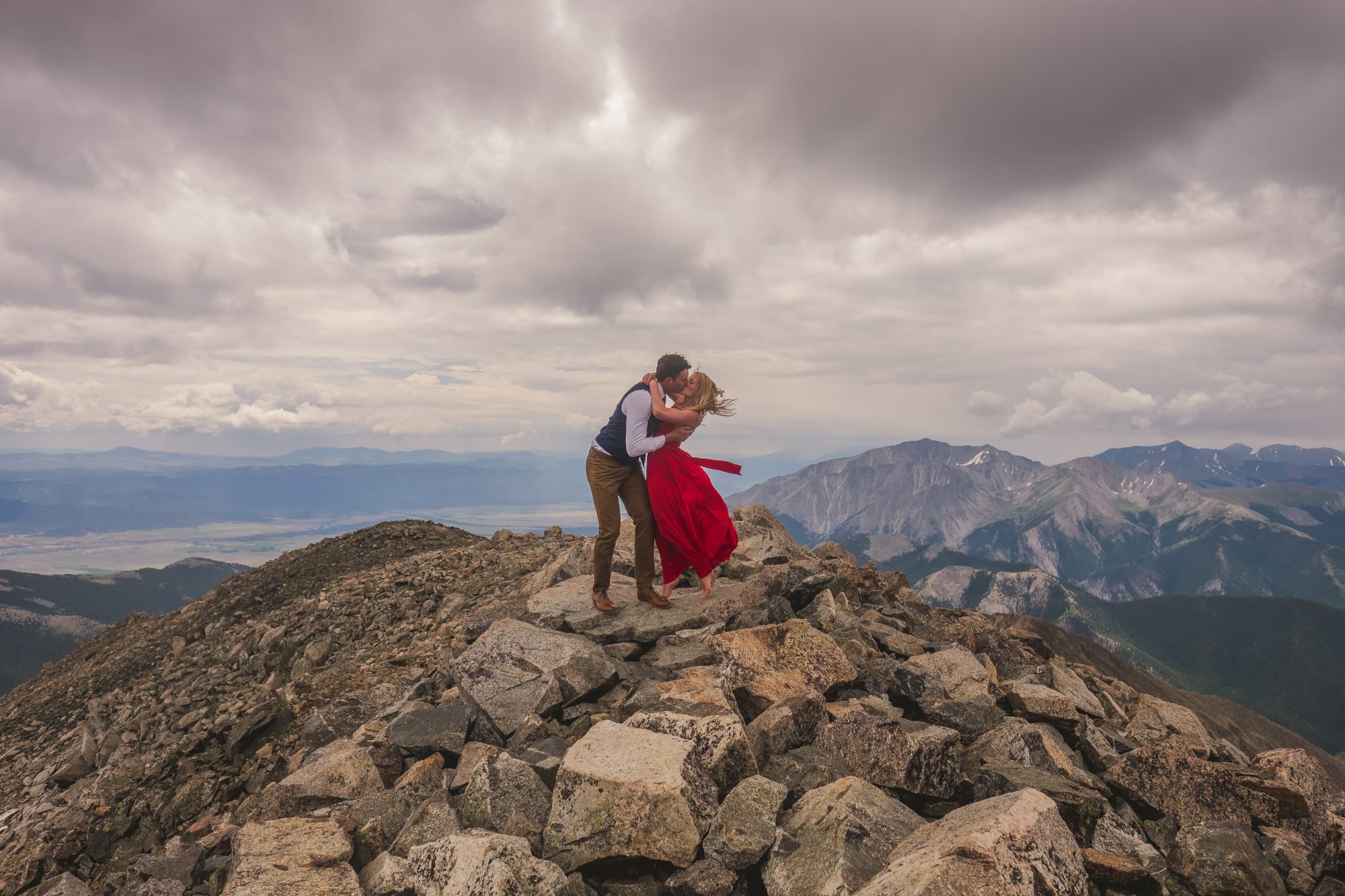 Macey regularly spoke at length about her talented college friend Benjamin Strong who she referred to as a world-class photographer. Ben, she said, had always dreamed of taking a picture of a couple in formal attire and specifically a woman in a red dress on top of one of the many 14,000 foot and higher peaks throughout Colorado. I knew there could be no-more thoughtful approach to ensuring a memorable and meaningful engagement than to convince Ben to come in from Wisconsin to make our day perfect. I knew the planning would be challenging, but did not know just how many conditions I would need to set in order to pull the whole thing off.

The first step was to make covert contact with Ben and determine his availability. I concluded that the only covert approach I could take to contacting ben would be over Facebook chat. I filtered through Macey’s friend and eventually found the man-bun wearing Ben that fit the description. I’m extremely lucky that Ben was so punctual and warm to the idea. Within a few days we concluded in early May that our window would be the weekend of Saturday the 22nd of July. Now committed to the plan, the real planning began.

Many questions bounced around in my head including how do I acquire a red dress in Macey’s size without her knowing? How do I get a photographer from near sea-level up to 14,000 ft without killing him? Which mountain should we climb? How do I conduct a recon of the proposal site?

Eventually, I decided that I needed some help with the plan so I enlisted one of my future groomsmen, Jimmy Agee to do a reconnaissance hike. I also enlisted the help of my friend and future groomsmen, Josh Simmonds, to pick up Ben from the airport the day prior and house him to keep the surprise alive. Our friend, Brie Ruse, also helped me select multiple dresses on Amazon for Macey so that we would be covered. Ben was extremely generous with his travel which, enabled us to make everything happen.

After reviewing many different mountains for the big day, I eventually landed on Mount Yale as the ideal choice. The approach to Mount Yale was a moderate-easy difficulty level of 2 relative to other fourteeners. Mount Yale was also located in the same valley as the Cottonwood Hotsprings Resort which made for an ideal pre-engagement stay the night prior. At 14,200 feet, Mount Yale is also one of the few peaks in the Sawatch Range of the Rocky Mountains that affords a unique 360 degree of relatively unobstructed views of the surrounding area. Many 14,000 and greater peaks are often obstructed by neighboring peaks.

Jimmy and I conducted our reconnaissance hike the weekend prior while Macey was attending a wedding in Indiana. Prior to climbing weather conditions became our biggest obstacle. 14,000 foot peaks are regularly unpredictable for weather and prone to lightening around the 1PM and later time frame. There was unfortunately a chance of thunderstorm the morning of our reconnaissance hike. Undaunted, we decided to accept that risk and give it our best shot. While a relatively easy climb, the last approach to the summit of Mount Yale is full of steep switch backs which made me second-guess the easy nature of the climb. Nonetheless, upon arrival at the summit of Mount Yale I was not disappointed by the impressive views that illuminate the entire Buena Vista Valley and peaks extending throughout the Sawatch range. My past experience with 14,000 foot peaks made me weary about where I was actually going to be able to kneel on the summit. Mount Yale came through again, however with a 10×10 ft patch of loose soil located about 20-30m from the wind shelter on the summit. At the point I pinpointed both a perfect proposal location and an ideal photographer position. We also mapped out our cell phone coverage as we came to the summit so that we would know when I could send Jimmy updates on our progress.

After the reconnaissance I figured out all of the timing of the engagement plan. Josh would pick up Ben from the airport the night prior to the engagement and would house him at his family home in Silverthorne along with Jimmy. Jimmy, Josh and Ben would then head to the trailhead and commence the climb at 5AM. The goal was originally to get 2 hours of buffer between the three studs commending the climb and Macey and I beginning our summit. Weather once again through a wrench into our plans, however, and I was forced to narrow that buffer to Macey and I departing at 6AM. Josh and Jimmy would load all of the required outfits into their packs and pack them up the mountain along with Ben’s gear. Upon the summit they would get into position and I would keep in regular contact with them to ensure that Macey and I were not catching up to them. To add another layer of security to ensuring Macey was surprised, we placed a “Baby on Board” sticker in the back of the Josh’s, who is single and does not have kids, Toyota 4Runner to confuse Macey in the event that she identified Josh’s car in the trailhead parking lot.

Now it came down to actually finding a dress. The dress had to be formal but, flexible since Macey would not be trying it on prior to summiting. I bought four dresses on Amazon and had them shipped to me. Macey’s friend Brie, who is equally tiny, helped me select my best two options that provided class and flexibility. After acquiring the dresses and putting together my outfit, I then passed all of our photo-shoot attire to Josh to take up to the peak along with Jimmy. Now all we had to do was execute the mission.

Friday night Macey and I spent the night at our hotsprings staging site and I talked at length about how lucky I was to be with her and all of the great things that had been a part of last year. That night as Mace drifted off, I acquired her phone, turned off her data services, and did a final weather check for the big day. The ring, champagne, and a custom summit sign, were all packed and sitting feet from me carefully concealed in my backpack for the next day. I had also managed to break in to her house to acquire some other sensitive wardrobe items to facilitate a successful shoot.

Saturday morning arrived and I prayed for good weather on the mountain. After arriving at the trailhead lot, I discreetly snuck her make-up bag into my backpack and we were off to the summit of our lives. The three heroes had already departed 3 hours prior and a text message from Josh had confirmed that all systems were go. Macey was un-aware of any of our scheming. Cell-phone coverage was spotty on the mountain and I frequently had fake being winded and knee-pain to get us to buy time for the guys to summit. I was unaware but, Jimmy and Josh had been spooked that they had seen us closing in on them and sent multiple descending folks down the mountain to attempt to slow our movement with lengthy trail conversation. Macey remarked “Man people are so friendly today.” As we neared the top of the wall before a false summit a cascade of text messages starting flowing in to me. “Slow down we can see you.” Josh messaged. Miraculously in that moment I decided to take a “knee-pain” and wind break. Awkwardly, I gestured to all of the beautiful mountains around us and that we should take in the view for a moment. Macey was eager to get to the summit to avoid any lightening risk from what looked like weather possibly closing in on us.

As it turned out, these messages were apparently delayed and I was happy find out my three lead climbers were in position. In my mind, I reflected on the fact that I was actually going to pull this off! We then slogged through the last bouldering field to the summit. Ben was in position to Facebook live our event with multiple camera angles plotted and made no easier by the uneven boulders that populated the summit. I had worked out a code word with the three that I promised to announce as we rounded the last switchback coming to the summit. 100 meters out, I proclaimed as loud as I could with winded lungs “The last push for Oregon and Wisconsin” (Our home states).

We arrived on the summit and I told Macey, “Hey why don’t you go ask that guy if he can take a picture of us?” As she turned to pass the camera to Ben to take a picture of us, I knelt and took out my Mount Yale summit sign which was double sided. The side that Macey saw before she walked away said “Mount Yale, 14,200ft.” As she turned and walked away, I quickly reached into my bag and pulled out ring while flipping to other side of the sign which said “Macey McDowell will you marry me?” She walked to Ben and she turned around I was on my knee!

The surprise on her face was something that I will never forget as she giggled and lit up. She happily accepted my proposal and we kissed and soaked in the moment. I then told her about all of the great things ahead of us and told her that she might know the then masked man with a camera taking hundreds of photos of us. She was amazed to see that her good friend from Wisconsin had suffered through a 14,200 foot climb just to make her day special. I will never be able to repay Ben for making that moment so amazing.

I then told her that it was time to get changed. I retrieved our formal attire from Josh and Jimmy, whom Macey was equally shocked were present on the summit. Despite the 40ish degree weather, Macey once again lit up. I held a poncho over Macey as she changed and begin changing into my own clothing. The wind was gusty on that Saturday which proved to provide some awesome movement and drama for our big photoshoot. I was once again reminded of one of the best things that I appreciate about Macey, her resiliency. Despite freezing wind and temperatures, her 100lb 5’3” self pushed through the cold to make our engagement photos special.

On our walk down the mountain Macey remained shocked and ecstatic. We were first off to a memorable engagement night party at the Mount Princeton Hot Springs Resort and an eternity of happiness. Ben, Josh, Jimmy, Brie and so many other friends who contributed to this great and amazing day will always have a special in my heart. I also have so much thankfulness to God for providing the weather window to enable us to capture a truly unique day and enabling the best summit of my life.